Designing an automatic system for placing cartons over the bottles, in crates, at a maximum productivity of 50 crates/minute. Two important demands was related to the gripper, which must be adjustable for three different types of cartons and crates and for the production, which cannot be stopped during carton magazine replacement. 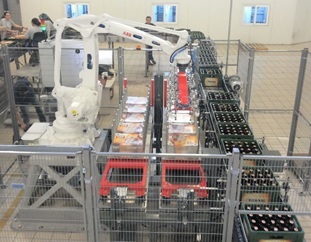 After analyzing the input data and after talking to the beneficiary, we proposed the following equipments:
- ABB IRB 460 robot, equipped with EvoFly gripper, for picking the cartons and placing them in crates, including the positioning of the carton cuts over the bottles neck.
- Automation, builded with Siemens S7-300 PLC, with touch screen for operator interface.
- Due to the  high precision requirement, for positioning the crates and the cartons, we used mechanical and pneumatically systems: pneumatically stoppers, pushers and special sideguides.
- Two carton magazines, 5 cells each, with level monitoring function.
- Safety. 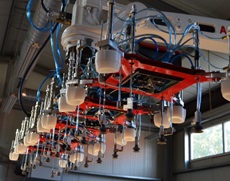 The products are detected by sensors and a group of 5 crates are stopped on the conveyor, under robot arm. The pneumatically align system position the crates on the conveyor. The robot will pick 5 cartons from the closest magazine and place them on the crates, pushing the cartons on the bottles neck. After this step, the 5 crates group is released and a new group is transferred in position, while the robot restart the carton picking procedure. If the current carton magazine will goes empty, the robot is automatically switched to the second carton magazine and the operator is allowed to slide the empty magazine out of the safety zone and to refill it.
Advantages of the solution:
 Universal gripper, adjustable for different types of cartons and crates.
 The production is not stopped during carton magazine refill.
 High positioning precision provided by the mechanic and pneumatic systems.
 Carton recovery function, if one carton is missing from the gripper.
 An easy operation of the line by means of the HMI display and of the console for the robot command.

“We are what we repeatedly do. Excellence, therefore, is not an act, but a habit.” -Aristotle

I am happy with this